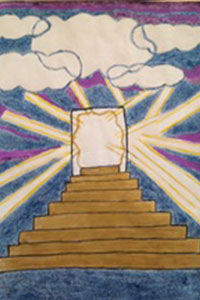 The vision that was placed upon the illustrator’s heart was a golden stairway, which was based on the author’s challenges and struggles that had occurred in her life.

The first few steps represent shock, hurt, heartache, disappointment, rejection and despair.  As Julie was obedient and poured her trust in God, the farther she climbed up the stairway. It was then that her process of healing began.  Restoration, forgiveness, peace and a renewed sense of strength and confidence – every step of the way, until she finally reached the top and entered into the lighted doorway.

Her destination was where her Savior was waiting. He was there with her all the time.

The Process of Writing The Book; The Peace of God Was With Me

God Has Much More
Scroll to top